Summer 1946. World War II has just come to an end, and there’s a yearning for renewal. A man in his thirties is sailing on Lake Maggiore in northern Italy, hoping to put off the inevitable return to work. Dropping anchor in a small, fashionable port, he meets the enigmatic owner of a nearby villa who invites him home for dinner with his older wife and beautiful widowed sister-in-law. The sailor is intrigued by the elegant waterside mansion, staffed with servants and imbued with mystery, and stays in a guest room previously occupied by a now-deceased bishop related to his host. The two men form an uneasy bond, recognizing in each other a shared taste for idling and erotic adventure. They soon set sail together, encountering old flames and making new conquests. But tragedy puts an abrupt halt to their revels and shatters the tranquility of the villa. What really happened on the dock? And who was the figure glimpsed cycling around the shore in the dark?

I Wanted Fries with That: How to Ask for What You Want and Get What You Need by Amy Fish (Format: eBook):

SPEAK UP AND PERSUADE

At some point in our lives, we’ve all experienced an injustice, large or small — a restaurant botching our lunch order or a boss who isn’t following the guidelines for workplace etiquette — and suffered in silence for fear of offending anyone. When we fail to speak up, however, we shortchange ourselves. Amy Fish encourages standing up for yourself (and others) by complaining effectively. Her suggestions will appeal to anyone who wants to speak up and isn’t sure where to start, including managers navigating workplace disputes, couples who argue about the same things over and over, and even someone with a friend with bad breath. Illustrating her points with funny real-life stories, Fish reveals pragmatic methods to redress grievances with civility, honesty, and fairness for everyone involved — whether you’re trying to right the wrongs of the world or just claim the french fries you ordered. 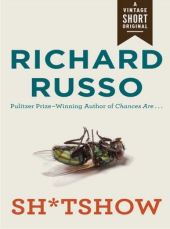 David and Ellie didn’t realize how much they have missed their friends, two other couples who had moved out of their modest neighborhood in a desert city for the comforts of the suburbs, until the day of Donald Trump’s election. Separated also from their daughter who lived hours away in California, they were in a funk. But, when Ellie discovers a repellant offering floating in the small Jacuzzi in their backyard, David is blindsided. Little does he know this is but the first in a chain of grisly events that would play out in their lives with devastating consequences.

In this darkly humorous, incisive and absorbing political parable, written with the remarkable humanity he’s beloved for with countless fans, Pulitzer Prize-winner Richard Russo probes how deeply, yet imperceptibly, fissures can form amongst friends, neighbors, and families.

“No one should miss this beautiful legend.” — Tony Hillerman

Based on an Athabascan Indian legend passed along for many generations from mothers to daughters of the upper Yukon River Valley in Alaska, this is the suspenseful, shocking, ultimately inspirational tale of two old women abandoned by their tribe during a brutal winter famine.

Though these women have been known to complain more than contribute, they now must either survive on their own or die trying. In simple but vivid detail, Velma Wallis depicts a landscape and way of life that are at once merciless and starkly beautiful. In her old women, she has created two heroines of steely determination whose story of betrayal, friendship, community, and forgiveness “speaks straight to the heart with clarity, sweetness, and wisdom” (Ursula K. Le Guin).

Tribute of Rome: One man, born in rural obscurity, destined to become one of Rome’s greatest Emperors
26 AD: 16-year-old Vespasian leaves his family farm for Rome, his sights set on finding a patron and following his brother into the army, but he discovers a city in turmoil and an Empire on the brink. The aging emperor Tiberius is in seclusion on Capri, leaving Rome in the iron grip of Sejanus, commander of the Praetorian Guard. Sejanus is ruler of the Empire in all but name, but many fear that isn’t enough for him. Sejanus’ spies are everywhere—careless words at a dinner party can be as dangerous as a barbarian arrow. Vespasian is totally out of his depth, making dangerous enemies (and even more dangerous friends—like the young Caligula) and soon finds himself ensnared in a conspiracy against Tiberius. With the situation in Rome deteriorating, Vespasian flees the city to take up a position as tribune in an unfashionable legion on the Balkan frontier. Even here, rebellion is in the air and unblooded and inexperienced, Vespasian must lead his men in savage battle with hostile mountain tribes. Vespasian will soon realize that he can’t escape Roman politics any more than he can escape his destiny.

Rome’s Executioner: A hero forged in battle. A legend born. Thracia, AD30: Even after four years military service at the edge of the Roman world, Vespasian can’t escape the tumultuous politics of an Empire on the brink of disintegration. His patrons in Rome have charged him with the clandestine extraction of an old enemy from a fortress on the banks of the Danube before it falls to the Roman legion besieging it.

Vespasian’s mission is the key move in a deadly struggle for the right to rule the Roman Empire. The man he has been ordered to seize could be the witness that will destroy Sejanus, commander of the Praetorian Guard and ruler of the Empire in all but name. Before he completes his mission, Vespasian will face ambush in snowbound mountains, pirates on the high seas, and Sejanus’s spies all around him. But by far the greatest danger lies at the rotten heart of the Empire, at the nightmarish court of Tiberius, Emperor of Rome and debauched, paranoid madman.

False God Of Rome: Vespasian’s mission will lead to violence, mayhem, and theft—and in the end, to a betrayal so great it will echo through the ages

Vespasian is serving as a military officer on the outskirts of the Roman Empire, suppressing local troubles and defending the Roman way. But political events in Rome—Tiberius’s increasingly insane debauchery, the escalating grain crisis—draw him back to the city. When Caligula becomes Emperor, Vespasian believes that things will improve. Instead, he watches the young emperor deteriorate from Rome’s shining star to a blood-crazed, incestuous, all-powerful madman. Lavish building projects, endless games, public displays of his relationship with his sister, Drusilla, and a terrified senate are as nothing to Caligula’s most ambitious plan: to bridge the bay of Neapolis and ride over it wearing Alexander’s breastplate. And it falls to Vespasian to travel to Alexandria and steal it from Alexander’s mausoleum.

The Body On The Train by Frances Brody: 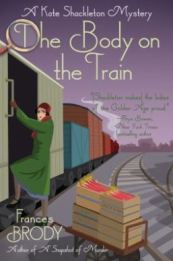 Abstract: “London, 1929. In the darkness before dawn, a railway porter, unloading a special train from Yorkshire, discovers a man’s body, shot and placed in a sack. There are no means of identification to be found and as Scotland Yard hits a dead end, they call on the inimitable Kate Shackleton, a local sleuth, confident her local knowledge and investigative skills will produce results. But it’s no easy task. Suspicion of political intrigue and fears of unrest in the Yorkshire coalfields, impose secrecy on her already difficult task. The murder of a shopkeeper, around the same time, seems too much of a coincidence. The convicted felon was found with blood on his hands, but it’s too tidy and Kate becomes convinced the police have the wrong man. By then it’s too late. Kate finds herself in a den of vipers. The real killer is still at large, and having tinkered with Kate’s car, nearly causes her to crash. Not only that, but Scotland Yard has turned their back on her. As Kate edges toward the shocking truth, she’s going to need all the strength and resourcefulness she can muster to uncover this sinister web of deceit.”–IndieBound.org

The Fall Of Richard Nixon: A Reporter Remembers Watergate by Tom Brokaw:

Abstract: “The last year of the Nixon presidency was filled with power politics, legal jiu-jitsu and high-stakes showdowns, with head-shaking surprises every day. Tom Brokaw, the NBC News White House correspondent during the final year of Watergate, gives us a close-up, personal account of the players, the strategies, and the highs and lows of the scandal that brought down a president. Brokaw writes, ‘Even now, almost half a century later, I am astonished by what the country went through, and I wanted to share press stories from the inside looking out — what it was like to be on call 24/7, the twists and turns, the laughs and tensions during this historic time.'”– Provided by publisher.

The Rise of Magicks by Nora Roberts: 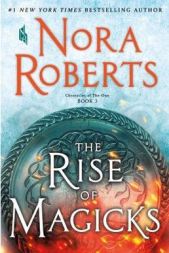 Abstract:”The #1 New York Times bestselling author of Year One and Of Blood and Bone concludes her stunning new trilogy praised as “A match for end-of-the-world classics like Stephen King’s The Stand.” After the sickness known as the Doom destroyed civilization, magick has become commonplace, and Fallon Swift has spent her young years learning its ways. Fallon cannot live in peace until she frees those who have been preyed upon by the government or the fanatical Purity Warriors, endlessly hunted or locked up in laboratories, brutalized for years on end. She is determined to save even those who have been complicit with this evil out of fear or weakness-if, indeed, they can be saved. Strengthened by the bond she shares with her fellow warrior, Duncan, Fallon has already succeeded in rescuing countless shifters and elves and ordinary humans. Now she must help them heal-and rediscover the light and faith within themselves. For although from the time of her birth, she has been The One, she is still only one. And as she faces down an old nemesis, sets her sights on the enemy’s stronghold, and pursues her destiny-to finally restore the mystical shield that once protected them all-she will need an army behind her…”– Provided by publisher.

Abstract: “In the latest thriller featuring the legendary Boston PI, Spenser heads to the City of Angels to meet old friends and new enemies in a baffling missing person case that might shake Tinseltown to its core”– Provided by publisher.

Abstract: Grandma Mazur is a widow … again. This time her marriage lasted a whole 45 minutes. The unlucky groom was one Jimmy Rosolli, local gangster, lothario (senior division) and heart attack waiting to happen … well, the waiting’s over. It’s a sad day, but if she can’t have Jimmy at least Grandma can have all the attention she wants as the dutiful widow. But some kinds of attention are not welcomed, particularly when Jimmy’s former “business partners” are convinced that his widow is keeping the keys to their financial success for herself. As someone who has spent an entire career finding bad guys, a set of missing keys should be no challenge for Stephanie Plum. Problem is, the facts are as twisted as a boardwalk pretzel with mustard.