Here are a few interesting tech stories you might have missed in the last 10 days:

Two Articles On A New Computer Board (The Raspberry Pi 2) Coming Soon To Library Programs In Your Area!

1. A. Article 1 is from the Wall Street Journal and offer some examples of what you can do with a $35 basic computer board: called the Raspberry Pi 2 – the article includes a neat video clip that has your WSJ hostess Joanna Stern showing off some of the cool things she did with her Raspberry Pi 2!

An open-source computer that encourages you to look inside. Wall Street Journal. Online. Accessed February 20, 201

1. B. And a second neat article on what you can do with the Raspberry Pi 2 from ZDNET:

2. Apple Developing Electric Car? Apple hasn’t commented on this but the tech rumor mill is a-buzz with word that Apple is developing an electric car and for the reasons why the rumor mill is buzzing with this topic The Wall Street Journal offers some solid info on just why this may indeed be so!

Here is the link:

3. Smart Doorbells: The Wall Street Journal also offered a cool article in the last week on the subject of just what a Smart Doorbell can do for you – which is cool!

4. Microsoft Mobile: Microsoft has recently made a great expansion into the world of mobile devices and New York Times tech columnist Nick Wingfield offers insight into the reasons why – here’s the link to the article:

5. A. The first article is from NPR and it discusses the new F.C.C. reclassification of the Internet as a public utility which was approved today (2-26-15):

5. B. And the second article is from the New York Times and it too discusses the F.C.C. ruling and both the pro and con sides of the argument for and against Net Neutrality:

6. Apple Announces New Press Event: Apple has announced a new press even to unveil new products. The event will be held on march 9 and is likely to showcase the new Apple Watch – here’s the link:

Apple likely will show off its high-tech watch next month ahead of the wearable’s April release. Other possibilities? An updated Apple TV or an “iPad Pro.” CNET. Online. Accessed February 26, 2015.

7. The Importance of Passwords: NPR offered an article the stressed the importance of both changing your online password on a regular basis and on creating complex passwords that are harder for Internet mischief makers to hack — here’s the link:

Joy Unleashed Workshop Series: Are you ready for a change? Learn and practice ten behaviors that can make your life happier and more satisfying. Sessions include a presentation, discussion and sharing. Bring a bagged lunch, if you wish. Beverages provided.

Series is based on the book, The Joy Diet: 10 Daily Practices for a Happier Life by Martha Beck.

3 D Printer Program: Smartphone Cases & Stands: This program will include a brief 3 D Printer presentation and then attendees will be select & modify templates for smartphone cases & stands from the Makerbot companion website Thingiverse.

Note: Because the 3 D Printer Process takes a while – attendees will have to pick up their creations at a later date.

Registration is required for the two programs listed above; to register stop in the library, give us a call at 607-936-3713 or send an email to us at: DIGLIT@STLS.ORG

Adult Creative Writers Group: Inject some socialization into your solo writing time by join the library’s Adult Creative Writers Group for conversation, inspiration and feedback on writing projects. No sign up is required. This group meets every Thursday from 6-8 pm. On the third Thursday of the month the group meets in the library. On the other Thursdays the group meets at Soul Full Cup CoffeeHouse. For more information, please call Adult Services Director Michelle Wells at (607) 936-3713 ext 209 or email wellsm@stls.org.

Did  You Know We Have Circulating E-Readers @ The Library?

We have e-readers that are pre-loaded with small self contained libraries of e-books in genre categories including: Fiction, Mysteries, Non-Fiction, Action & Adventure and Young Adult.

And we just added some new e-books to our circulating e-readers!

Here’s a link to a PDF of the list:

And here are some photos!

And if have questions about our circulating e-readers or anything relating to the handout please let me know!

You can contact me by replying to this posting, posting something on our Facebook page or simply sending an email to me at: REIMERL@STLS.ORG 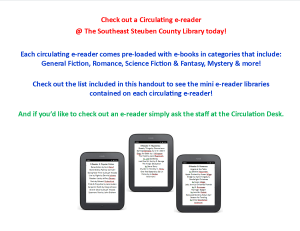 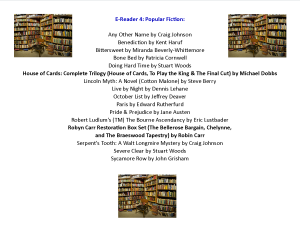 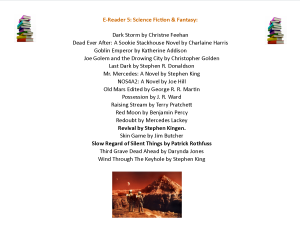 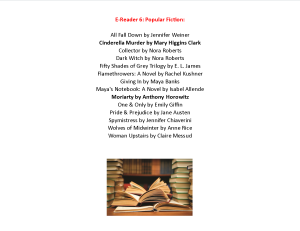 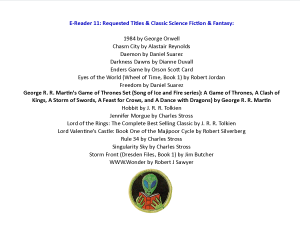 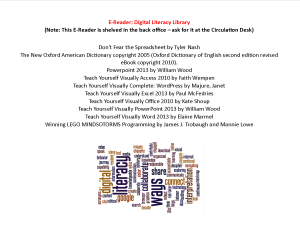 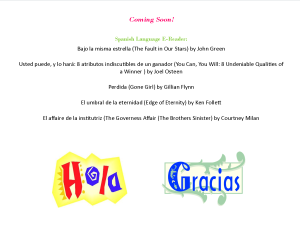 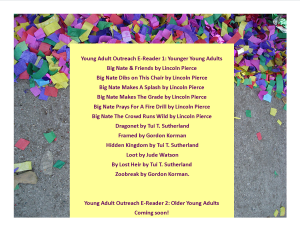 And here are a handful of personal technology related stories you might have missed this week — courtesy of the SSCL Digital Literacy Services Dept. where we love technology!

1. Article 1 is from The New York Times and relays information about Apple building a solar farm to power all of its California buildings – here’s the link:

3. Article 3 is from Rolling Stone’s The Daily Beast and it offers a look at just how the power of the common people was felt and heard during the F.C.C. open comment period – where millions of Americans posted their support of Net Neutrality on the F.C.C’s website — here’s the link:

4.Article 4 offers a story on how Tim Cook and Apple are working to make products that change the way people live for the better — here’s the link:

Apple Watch Is to Change the Way People Live Their Lives. MacRumors. Online.

5. Article 5 offers a look at the new Phorm tactile keyboard for the iPad – very cool! Here’s the link:

6. Article 6 is from tech columnist Bonnie Cha who offers a look at just what an iPhone “Carrie Settings Update” is anyway! Here’s the link:

7. And Article 7 is from CNET and relays the fact that Sling TV, the service that offers you a handful of TV channels, like ESPN, that used to only be available via a cable subscription but that now can be purchased for an Internet subscription for $20 a month – is offering a free Amazon Fire or Roku streaming stick if you pay for a six month subscription to Sling TV – here’s the link:

Here’s a listing of Tech Stories You Might Have Missed for last week!

This new trend nicely compliments the trend of incorporating Makerspaces into public libraries – stay tuned to our website for news about the SSCL Makerspace coming sometime this year to your library!

And in the meantime here’s the link to the Non Profit Quarterly article:

However, as there have been many, many stories & comments made on the subject of Net Neutrality and the plan to reclassify Internet service as a utility by many different public personages and companies in the last week – you might have missed the editorial Wheeler did for the Wired site where he explained in his own words why he believes reclassifying Internet services as a utility is the best way to gain true Net Neutrality for all U.S. citizens – so here’s the link to his editorial:

If you like Science Fiction movies — join us for our monthly Tech Movies!

The monthly Tech Movies are shown at the library, on the big screen in our Community Room, the second Friday of each month.

And this Friday, February 13th we’ll be showing the Science Fiction & Comedy classic Sleeper from 1973.

Here’s summary of the film:Drawing on the great tradition of silent comedy, Sleeper is Woody Allen’s first film to tame his verbal wit and showcase his emerging skill with visual and physical comedy. Starring Diane Keaton (directed by Allen for the first time), Sleeper is “a bizarre mixture of New York neuroses, splendidly lunatic sight gags, Alice-in-Wonderland illogic, and too-funny-to-be-painful satire” (Los Angeles Herald-Examiner) When cryogenically preserved Miles Monroe (Allen) is awakened 200 years after a hospital mishap, he discovers the future’s not so bright: all women are frigid, all men are impotent, and the world is ruled by an evil dictator – a disembodied nose! Pursued by the secret police and recruited by anti-government rebels with a plan to kidnap the dictator’s snout before it can be cloned, Miles falls for the beautiful – but untalented – poet Luna (Keaton). But when Miles is captured and reprogrammed by the government – to believe he’s Miss America! – it’s up to Luna to save Miles, lead the rebels, and cut off the nose  just to spite its face. MPAA Rating:  PG. Run Time: 88 minutes Technology Subject: Advanced Technology/ Criogenesis/Futuristic Society.

Did I mention this film is a comedy in Science Fiction clothing?

Are you an expert on a specific type of software, hardware or a specific operating system?

Do you have some extra time you would be willing to give to volunteer at the library?

If so let us know! Our tech team is looking for volunteers to assist us with presenting programs and demonstrations that will assist our patrons in honing their higher end digital literacy skills!

And by “higher end” I mean above the basic skill sets that allow computer users to easily surf the web, send & receive email, create documents in Word or Excel or use a smartphone or tablet etc.

So if you’re interested let us know and you can help us plan & implement our upcoming higher end tech programs for 2015.