Hi everyone, here’s a link to a PDF of the fall 2014 Digital Literacy Services program schedule!

Our fall offerings include iPad Workshops, music & tech programs, a few fun technology movies (read that as science fiction or fantasy films with some technology in the plot or background of the film); and our always informative One-On-One sessions that allow you to pick a time that is convenient for you to come in and meet with a member of our Digital Literacy Service staff and go over how to use your tablet, e-reader, smartphone, laptop or other gadget — cool stuff!

And this Friday, August 22, 2014, we’ll be hosting our monthly Senior Personal Technology program — this one is “Internet Basics” and will offer basic information regarding how you get online and what you do once you get there!

Refreshments will be provided!

You can register by:

Dropping by the library!

Or, sending an email request to: DIGLIT@STLS.ORG

See you on Friday! Linda

If you have a smartphone or tablet and would like to know more about how to use photo apps, available in your app store, to edit photos or make them fancy, join us for our Photo Apps workshop!

Registration is appreciated — just so we know how many people to set up for!

You can register in person at the library, by telephone 607-936-3713, or, by sending an email to us at the following email address: DIGLIT@STLS.ORG

Just a reminder for job seekers there is still time to register for the August “Creating An Effective Resume with Lynn Paige” workshop!

And ProAction’s resume and job seeking  expert Lynn Paige will be your hostess and with bells on to assist you in creating a brand new, cutting edge resume!

If you’re looking for a new job or even are just interested in updating your resume – we have workshops for you!

Lynne Paige, a Workforce resume & job search expert who really knows her stuff, is hosting resume workshops at the library in August, September, October & November! And if you attend one of these workshops you’ll leave with a brand resume in hand!

And, on September 27, 2014, SSCL Digital Literacy Services in collaboration with CSS Workforce New York, The City of Corning & The Corning Area Chamber of Commerce will be hosting the 3rd Annual Job Fair at the library!

The Job Fair will run from 10 a.m. to 1 p.m. and we will have staff on hand to assist job seekers in creating a new resume if they don’t already have one!

So join us for our resume workshops, titled Creating an Effective Resume with Lynne Paige, on any of the following dates from 1:00 – 4:00 p.m.:

Resumes workshops are free and you can register for any of the workshops by calling the library at: 607-936-3713; or by sending an email to us at: DIGLIT@STLS.ORG

And feel free to print off, email and share the Resume Workshop & Job Fair brochure! 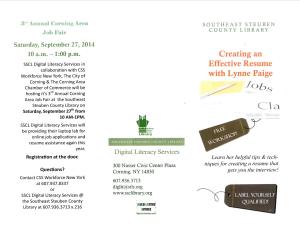 Believe it or not ANSCAR is a real term and not a made up word!

The term ANSCAR is actually, as you probably guessed; an acronym for what is essentially library lingo!

ANSCAR stands for “The Alpha Numeric System for Collections of Recordings.”

And the word is actually pronounced as if it were spelled “answer”  — just ignore that “A!”

And if you’re a music fan you should read on because ANSCAR is the system our library uses to file music on CD.

And despite the fact that digital music is exceptionally popular today CDs are still around, we still add them to our collection on a regular basis and they still circulate with furious intensity!

People do love music! (And the library staff does too!)

So if you’re in the library and you love music – you should check out some of our CDs!

The basic gist of the CD classification system is that there are 42 one or two letter prefix codes for the call numbers of music CDs in public library land; and after the prefix code you find the first four letters of the artist, composer or group.

To break down the ANSCR code for Abbey Road:

The next four letters are the first four of the group’s name or the name of the artist – BEAT, of course, stands for Beatles.

And the final two numbers seen right after the “B” – the “62” are the last two numbers of the record company assigned catalog number of the CD.  You can find these numbers on the disc itself – and the whole catalog number for this CD version of Abbey Road is: CDP 7 46446 2.

A few more examples of ANSCR classification codes for CDs the library owns are:

So that is the basic lowdown on how the music compact discs are shelved in our library!

On a related note, if you’re ever looking for a music title you can’t find ask the staff! We’ll either request it from another library if our copy is out or see if we can’t purchase a copy for our collection.

If you’re using a tablet or smartphone look for the Freegal Music app in your app store.

And on another musical note, our Digital Literacy Service staff is going to be hosting a new music program this fall called “Music Old & New & Open Mic Too.”

Our new program will feature tips on how you can use modern technology to enjoy music today as well as a short presentation and will highlight traditional hands on music including: traditional American folk music, blues, country and even a bit of rock n ’roll too.

We’ll feature a discussion section when all attendees will be encouraged to share suggestions as to great songs, artists and albums they enjoy and would recommend to others (and, with the recommenders permission, we will be posting those music suggestions on our blog so we can all access the information later & remember what was suggested!).

We’ll have a staff lead sing-along and close with an open mic session when anyone who wants to sing a song old or new will have the opportunity to do so. The first program is scheduled for Thursday, September 25, 2014 at 6 p.m. Join us!

And that is the library music update for today!

*2: For classical recordings the letter in that fourth set of letters/numbers may be the first one in the name of the production company or the title of the piece.