Hi everyone, here are our three recommended non-fiction DVDs for this week!

Description:This relaxing collection of music, perfect for fall, and  includes the following artists/songs:

To be by Montreux

Cast Your Fate to the Wind by George Winston

The Bricklayer’s Beautiful Daughter by Will Ackerman

Night In That Land by Nightnoise

Carol of the Bells by Windham Hill Artists

The Gift by Jim Brickman and friends

Reflections of Passion by Yanni

2. Traces of the Trade: A Story from the Deep North

Description: In the feature documentary Traces of the Trade: A Story from the Deep North, filmmaker Katrina Browne discovers that her New England ancestors were the largest slave-trading family in U.S. history. She and nine cousins retrace the Triangle Trade and gain powerful new perspectives on the black/white divide.

In Traces of the Trade, Producer/Director Katrina Browne tells the story of her forefathers, the largest slave-trading family in U.S. history. Given the myth that the South is solely responsible for slavery, viewers will be surprised to learn that Browne’s ancestors were Northerners. The film follows Browne and nine fellow family members on a remarkable journey which brings them face-to-face with the history and legacy of New England’s hidden enterprise.

From 1769 to 1820, DeWolf fathers, sons and grandsons trafficked in human beings. They sailed their ships from Bristol, Rhode Island to West Africa with rum to trade for African men, women and children. Captives were taken to plantations that the DeWolfs owned in Cuba or were sold at auction in such ports as Havana and Charleston. Sugar and molasses were then brought from Cuba to the family-owned rum distilleries in Bristol. Over the generations, the family transported more than ten thousand enslaved Africans across the Middle Passage. They amassed an enormous fortune. By the end of his life, James DeWolf had been a U.S. Senator and was reportedly the second richest man in the United States.

The enslavement of Africans was business for more than just the DeWolf family. It was a cornerstone of Northern commercial life. The Triangle Trade drove the economy of many port cities (Rhode Island had the largest share in the trade of any state), and slavery itself existed in the North for over 200 years. Northern textile mills used slave-picked cotton from the South to fuel the Industrial Revolution, while banks and insurance companies played a key role throughout the period. While the DeWolfs were one of only a few “slaving” dynasties, the network of commercial activities that they were tied to involved an enormous portion of the Northern population. Many citizens, for example, would buy shares in slave ships in order to make a profit.

The film follows ten DeWolf descendants (ages 32-71, ranging from sisters to seventh cousins) as they retrace the steps of the Triangle Trade, visiting the DeWolf hometown of Bristol, Rhode Island, slave forts on the coast of Ghana, and the ruins of a family plantation in Cuba. Back home, the family confronts the thorny topic of what to do now. In the context of growing calls for reparations for slavery, family members struggle with the question of how to think about and contribute to “repair.” Meanwhile, Browne and her family come closer to the core: their love/hate relationship with their own Yankee culture and privileges; the healing and transformation needed not only “out there,” but inside themselves.

The issues the DeWolf descendants are confronted with dramatize questions that apply to the nation as a whole: What, concretely, is the legacy of slavery—for diverse whites, for diverse blacks, for diverse others? Who owes who what for the sins of the fathers of this country? What history do we inherit as individuals and as citizens? How does Northern complicity change the equation? What would repair—spiritual and material—really look like and what would it take? 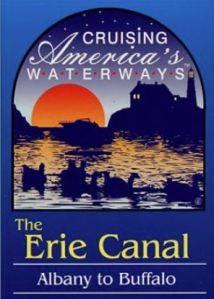 The award-winning Cruising America’s Waterways series explores New York State’s Erie Canal, the world’s most successful canal. Opened in 1825, today’s canal is a recreational and historic waterway lined with cultural and scenic opportunities. Learn about the canal’s mechanical structures; travel on a hire boat; visit charming canalside communities including Lockport, Baldwinsville, Fairport, Waterford, and Little Falls; and tour attractions in Syracuse, Rochester, and of course, Albany and Buffalo. Whether traveling by boat, car, bicycle, or simply walking on canalside trails, the Erie is one of America’s greatest waterways.

Have a good weekend!