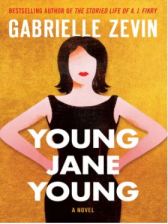 From the author of the international bestseller The Storied Life of A. J. Fikry comes another novel that will have everyone talking.

Aviva Grossman, an ambitious congressional intern in Florida, makes the mistake of having an affair with her boss—and blogging about it. When the affair comes to light, the beloved congressman doesn’t take the fall. But Aviva does, and her life is over before it hardly begins: slut-shamed, she becomes a late-night talk show punch line, anathema to politics.

She sees no way out but to change her name and move to a remote town in Maine. This time, she tries to be smarter about her life and strives to raise her daughter, Ruby, to be strong and confident. But when, at the urging of others, Aviva decides to run for public office herself, that long-ago mistake trails her via the Internet and catches up—an inescapable scarlet A. In the digital age, the past is never, ever, truly past. And it’s only a matter of time until Ruby finds out who her mother was and is forced to reconcile that person with the one she knows.

Young Jane Young is a smart, funny, and moving novel about what it means to be a woman of any age, and captures not just the mood of our recent highly charged political season, but also the double standards alive and well in every aspect of life for women.

“Timely, dark, and ultimately hopeful: it might not ‘make America great again,’ but then again, it just might.”—Cory Doctorow, New York Times bestselling and award winning author of Homeland

Acclaimed short story writer and editor of the World Fantasy Award-nominee Three Messages and a Warning eerily envisions an American society unraveling and our borders closed off—from the other side—in this haunting and provocative novel that combines Max Barry’s Jennifer Government, Philip K. Dick’s classic Man in the High Castle, and China Mieville’s The City & the City

The United States of America is no more. Broken into warring territories, its center has become a wasteland DMZ known as “the Tropic of Kansas.” Though this gaping geographic hole has no clear boundaries, everyone knows it’s out there—that once-bountiful part of the heartland, broken by greed and exploitation, where neglect now breeds unrest. Two travelers appear in this arid American wilderness: Sig, the fugitive orphan of political dissidents, and his foster sister Tania, a government investigator whose search for Sig leads her into her own past—and towards an unexpected future.

Sig promised those he loves that he would make it to the revolutionary redoubt of occupied New Orleans. But first he must survive the wild edgelands of a barren mid-America policed by citizen militias and autonomous drones, where one wrong move can mean capture . . . or death. One step behind, undercover in the underground, is Tania. Her infiltration of clandestine networks made of old technology and new politics soon transforms her into the hunted one, and gives her a shot at being the agent of real change—if she is willing to give up the explosive government secrets she has sworn to protect.

As brother and sister traverse these vast and dangerous badlands, their paths will eventually intersect on the front lines of a revolution whose fuse they are about to light.