Hi everyone, here are our suggested daily recommended titles for today. 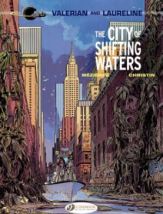 The City of Shifting Waters by Jean-Claude Mézières:

Galaxity, capital of the Terran Empire in the 28th century. Valerian and Laureline are agents who protect mankind from rogue time travellers. Now they are sent to New York in 1986 to intercept Galaxity’s worst megalomaniac, Xombul-except that in 1986, the world is in ruins and New York is about to be swallowed by the ocean. The two agents must navigate the shifting waters of the past to make sure that the future will exist.

In anticipation of the new Outlander seasons staring in September, our print book suggested read for the day is:

Seven Stones to Stand or Fall: A Collection of Outlander Fiction by Diana Gabaldon:

“The Custom of the Army” begins with Lord John Grey being shocked by an electric eel and ends at the Battle of Quebec. Then comes “The Space Between,” where it is revealed that the Comte St. Germain is not dead, Master Raymond appears, and a widowed young wine dealer escorts a would-be novice to a convent in Paris. In “A Plague of Zombies,” Lord John unexpectedly becomes military governor of Jamaica when the original governor is gnawed by what probably wasn’t a giant rat. “A Leaf on the Wind of All Hallows” is the moving story of Roger MacKenzie’s parents during World War II. In “Virgins,” Jamie Fraser, aged nineteen, and Ian Murray, aged twenty, become mercenaries in France, no matter that neither has yet bedded a lass or killed a man. But they’re trying. . . . “A Fugitive Green” is the story of Lord John’s elder brother, Hal, and a seventeen-year-old rare book dealer with a sideline in theft, forgery, and blackmail. And finally, in “Besieged,” Lord John learns that his mother is in Havana—and that the British Navy is on their way to lay siege to the city.

Filling in mesmerizing chapters in the lives of characters readers have followed over the course of thousands of pages, Gabaldon’s genius is on full display throughout this must-have collection.

Here’s a link to request the book in StarCat:

Also available in the Digital Catalog is Diana Gabaldon’s Voyager – the basis for the third season of the popular TV series which makes its debut in September.

Here’s a link to request it: