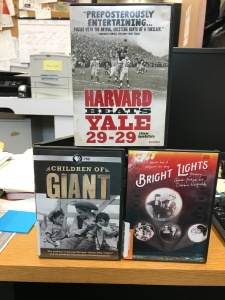 1. Harvard Beats Yale 29-29: An incredible true story that unfolds like a ripping good yarn… With an uproarious, impossible Hollywood ending (Andrew O Hehir, Salon.com), Harvard Beats Yale 29-29 is filmmaker Kevin Rafferty s (The Atomic Cafe) acclaimed documentary depicting one of the most legendary games in the history of sports. Harvard Stadium November 23, 1968. With Vietnam raging, Nixon in the White House, and issues from civil rights to women’s lib dividing the country, Harvard and Yale, both teams undefeated for the first time since 1909, meet for the annual climax of the Ivy League football season. On the blue-blooded Yale campus, gridiron fever has made local celebrities out of a Yale team led by quarterback Brian Dowling, who hadn t lost a game that he finished since the 7th grade, and who was the role model for Doonesbury s B.D. At civil unrest scarred Harvard, a melting pot team of working class players, antiwar activists, and a decorated Vietnam vet set aside their differences for the Big Game. Together, Yale and Harvard stage an unforgettable football contest that baffled even their own coaches. Using vintage game footage and bracingly honest contemporary interviews with the players from both sides, including Harvard lineman and future Oscar® winner Tommy Lee Jones (No Country for Old Men), Rafferty crafts an alternately suspenseful, hilarious, and poignant portrait of American lives, American sports, and American ideals both tested on the playing field and transformed by turbulent times.

2. Children of Giant: In the summer of 1955, it seemed as if all of Hollywood descended on the dusty West Texas town of Marfa as production began on the movie Giant, starring a legendary trio–Elizabeth Taylor, Rock Hudson, and James Dean–along with young actors Earl Holliman and Elsa Cardenas. Based on Edna Ferber’s controversial novel, Giant was a different kind of western, taking an unflinching look at feminism and class divisions, and at the racial divide between Anglos and Mexican Americans in the Southwest. The movie earned ten Academy Award® nominations, with a win for George Stevens as Best Director.

Now, 60 years later, Children of Giant returns to Marfa to explore the dramatic story behind the making of the film and its enduring legacy, combining interviews with the surviving cast and crew with the recollections of residents who participated in the production, many of whose lives mirrored the controversial themes of racism and segregation explored in the film. Featuring rare behind-the-scenes footage and never-before-seen photos, Children of Giant includes interviews with several noted film historians, celebrating a film classic that remains as powerful and relevant today as when it was first released.

Here’s a link to request Children of Giant:  https://goo.gl/5vYUry

3. Bright Lights: Starring Carrie Fisher and Debbie Reynolds: An intimate portrait of two of Hollywood’s most fascinating personalities, Bright Lights: Starring Carrie Fisher and Debbie Reynolds has become, poignantly, both a requiem and celebration of the two movie icons, who sadly and unexpectedly died one day apart in December 2016: Star Wars actress/author Carrie Fisher and her mother, Singin’ in the Rain star Debbie Reynolds. Shot mainly inside the Beverly Hills compound where both Fisher and Reynolds lived (their two houses were connected by one walkway), the film captures the unique chemistry and eccentricity that bound these two generations of Hollywood royalty. Given unusual access to each woman’s home and life, directors Alexis Bloom and Fisher Stevens captured the quicksilver wit and intelligence shared by both women as they orbited around each other, living separate lives but kept close by the gravitational pull of love and family.

And, as far as Dewey goes, as the focus of this DVD is on two actresses the call number section is, as it was with Children of Giant, in the 791.4 area.