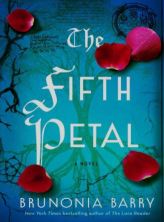 The Fifth Petal: A Novel of Salem by Brunonia Barry:

Could a witch hunt happen again in Salem?

For readers of Deborah Harkness’s A Discovery of Witches, New York Times bestselling author of The Lace Reader Brunonia Barry returns to Salem with this spellbinding new thriller, a complex brew of suspense, seduction and murder.

When a teenage boy dies suspiciously on Halloween night, Salem’s chief of police, John Rafferty, wonders if there is a connection between his death and Salem’s most notorious cold case, a triple homicide dubbed “The Goddess Murders,” in which three young women, all descended from accused Salem witches, were slashed on Halloween night in 1989. He finds unexpected help in Callie Cahill, the daughter of one of the victims newly returned to town. Neither believes that the main suspect, Rose Whelan, respected local historian, is guilty of murder or witchcraft.

But exonerating Rose might mean crossing paths with a dangerous force. Were the women victims of an all-too-human vengeance, or was the devil raised in Salem that night? And if they cannot discover what truly happened, will evil rise again?

A House Among The Trees by Julia Glass:

In Julia Glass’s fifth book since her acclaimed novel Three Junes won the National Book Award, she gives us the story of an unusual bond between a world-famous writer and his assistant—a richly plotted novel of friendship and love, artistic ambition, the perils of celebrity, and the power of an unexpected legacy.

When the revered children’s book author Mort Lear dies accidentally at his Connecticut home, he leaves his property and all its contents to his trusted assistant, Tomasina Daulair, who is moved by his generosity but dismayed by the complicated and defiant directives in his will. Tommy knew Morty for more than four decades, since meeting him in a Manhattan playground when she was twelve and he was working on sketches for the book that would make him a star. By the end of his increasingly reclusive life, she found herself living in his house as confidante and helpmeet, witness not just to his daily routines but to the emotional fallout of his strange boyhood and his volatile relationship with a lover who died of AIDS. Now Tommy must try to honor Morty’s last wishes while grappling with their effects on several people, including Dani Daulair, her estranged brother; Meredith Galarza, the lonely, outraged museum curator to whom Lear once promised his artistic estate; and Nicholas Greene, the beguiling British actor cast to play Mort Lear in a movie.

When the actor arrives for the visit he had previously arranged with the man he is to portray, he and Tommy are compelled to look more closely at Morty’s past and the consequences of the choices they now face, both separately and together. Morty, as it turns out, made a confession to Greene that undermines much of what Tommy believed she knew about her boss—and about herself. As she contemplates a future without him, her unlikely alliance with Greene—and the loyalty they share toward the man whose legacy they hold in their hands—will lead to surprising upheavals in their wider relationships, their careers, and even their search for love.