This week I’m going to recommend the following three Non-Fiction DVDs for your weekend viewing pleasure: Ken Burn’s Baseball, Dick Cavett’s Watergate and a PBS documentary on the great Civil Rights Activist and Senator — John Lewis — titled Get In The Way.

This 11 disc set tells the story of baseball from its very beginnings. Seen in the photo is the case of disc 1 which chronicles the story between the years 1840 and 1910.

The 1&2 indicates that this case contains the first two discs in a multi disc set.

This PBS special chronicles the news and happenings of the Watergate Crisis of the 1970s as it was relayed on the legendary Dick Cavett talk show.

The Dewey number for this set is DVD 973.924 DIC – the 970s being the place you’ll find books on American history. 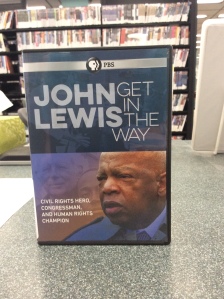 Our third suggestion for this week is another PBS documentary – this one on the legendary Civil Rights Activist and Senator – John Lewis who talks about what it was like to live through and be an integral part of the Civil Rights Movement of the 1950s and 1960s. Senator Lewis also discusses some of the main issues our government and nation face today.

Since this disc features a biographical documentary, the Dewey number isn’t a number at all! Just the prefix B is used to indicate it is a biography, and then the last name of the person it is about in this case John Lewis. So the call number for this disc is B LEWIS.