Glass House: The 1% Economy and the Shattering of the All-American Town by Brian Alexander: 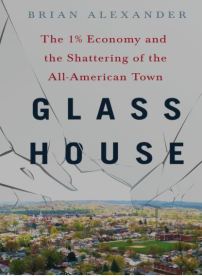 For readers of Hillbilly Elegy and Strangers in Their Own Land

“A devastating read…For anyone wondering why swing-state America voted against the establishment in 2016, Mr. Alexander supplies plenty of answers.” ―The Wall Street Journal

In 1947, Forbes magazine declared Lancaster, Ohio the epitome of the all-American town. Today it is damaged, discouraged, and fighting for its future. In Glass House, journalist Brian Alexander uses the story of one town to show how seeds sown 35 years ago have sprouted to give us Trumpism, inequality, and an eroding national cohesion.

The Anchor Hocking Glass Company, once the world’s largest maker of glass tableware, was the base on which Lancaster’s society was built. As Glass House unfolds, bankruptcy looms. With access to the company and its leaders, and Lancaster’s citizens, Alexander shows how financial engineering took hold in the 1980s, accelerated in the 21st Century, and wrecked the company. We follow CEO Sam Solomon, an African-American leading the nearly all-white town’s biggest private employer, as he tries to rescue the company from the New York private equity firm that hired him. Meanwhile, Alexander goes behind the scenes, entwined with the lives of residents as they wrestle with heroin, politics, high-interest lenders, low wage jobs, technology, and the new demands of American life: people like Brian Gossett, the fourth generation to work at Anchor Hocking; Joe Piccolo, first-time director of the annual music festival who discovers the town relies on him, and it, for salvation; Jason Roach, who police believed may have been Lancaster’s biggest drug dealer; and Eric Brown, a local football hero-turned-cop who comes to realize that he can never arrest Lancaster’s real problems.

A graphic novel biography of the American legend who inspired the hit Broadway musical Hamilton.

Alexander Hamilton was one of the most influential figures in United States history—he fought in the Revolutionary War, helped develop the Constitution, and as the first Secretary of the Treasury established landmark economic policy that we still use today. Cut down by a bullet from political rival Aaron Burr, Hamilton has since been immortalized alongside other Founding Fathers such as George Washington and Thomas Jefferson—his likeness even appears on the ten-dollar bill. In this fully-illustrated and impeccably researched graphic novel-style history, author Jonathan Hennessey and comic book illustrator Justin Greenwood bring Alexander Hamilton’s world to life, telling the story of this improbable hero who helped shape the United States of America.