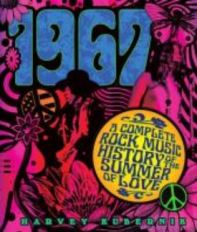 During late spring 1967, tens of thousands of young people began streaming into San Francisco, kicking off a counterculture revolution and cultural explosion that was the Summer of Love. Now, on the 50th anniversary of that revolutionary event, acclaimed journalist and pop culture historian Harvey Kubernik takes us on an insider’s look at the happenings in San Francisco, Los Angeles, and beyond—in the months leading up to, during, and after that seminal summer—through the lens of rock music. This lush volume features a trove of little-known and previously unpublished interviews with scenemakers and musicians of the time and the people who knew them; psychedelic festival posters, concert flyers, and other 1960s ephemera; and stunning images from acclaimed photographers of the era.

“Packed with new interviews with principals like Carlos Santana, Michelle Phillips and Roger McGuinn, [1967] gives month-by-month accounts of the scenes in London, San Francisco, New York, and even Australia, where the Bee Gees were scoring their first hits. The result breathes new life into a wide-open cultural moment.”—Rolling Stone

Some of the many musicians featured in the book include Janis Joplin, Jimmy Hendrix, The Rolling Stones, The Jefferson Airplane, The Grateful Dead, The Buffalo Springfield, Otis Redding, The Doors, The Mar-Keys, The Byrds, The Bee Gees and Pink Floyd.

In 1905, representatives from dozens of radical labor groups came together in Chicago to form One Big Union—the Industrial Workers of the World (IWW), known as the Wobblies. The union was a big presence in the labor movement and everywhere its members went, they sang.

Their songs were sung in mining camps and textile mills, hobo jungles and flophouses, and anywhere workers might be recruited to the Wobbliers’ cause. The songs were published in a pocket-size tome called the Little Red Songbook, which was so successful that it’s been published continuously since 1909.

In The Big Red Songbook, the editors have gathered songs from over three dozen editions, plus additional songs, rare artwork, personal recollections, discographies, and more into one big all-embracing book.

IWW poets/composers strove to nurture revolutionary consciousness. Each piece—whether topical, hortatory, elegiac, or comic—served to educate, agitate, and emancipate workers. A handful of Wobbly numbers have become classics, still sung by labor groups and folks singers. They include Joe Hill’s sardonic he Preacher and the Slave” (sometimes known by hit famous phrase “Pie in the Sky”) and Ralph Chaplin’s “Solidarity Forever.” Songs lost or found, sacred or irreverent, touted or neglected, serious or zany, singable or not, are here. The Wobblies and their friends have been singing for a century. May this comprehensive gathering simultaneous celebrate past battles and chart future goals.”

Some of the 250+ songs chronicled in the book include:

If You Workers Would Only Unit written by Richard Brazier

The Parasites by John E. Nordquist 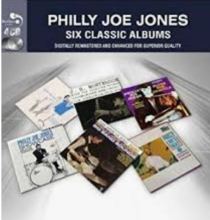 Drummer Philly Joe Jones’ debut recording as a leader, made shortly after he left Miles Davis’ Quintet, starts out with his amusing but overly long monologue on “Blues for Dracula,” during which he does his best to imitate Bela Lugosi. The remainder of the set (which has been reissued on CD) is more conventional, with fine playing from cornetist Nat Adderley, trombonist Julian Priester, the great tenor Johnny Griffin, pianist Tommy Flanagan, bassist Jimmy Garrison, and the drummer/leader. Dizzy Gillespie’s “Ow” and Cal Massey’s “Fiesta” are heard in lengthy versions on the worthwhile but not overly essential release. Scott Yanow, AllMusic Review

I know Halloween seems like it is a long time off, however, it will be here before we know it! And as the library only has a handful of Halloween music CDs for adults – I think now is the time to recommend my favorite Halloween CD – Halloween Stomp!

And here’s the AllMusic Review for more info! This collection of “spooky” performances is dominated by songs dealing with ghosts and monsters, everything from “Mysterious Mose” and “Got the Jitters” to “Zombie,” “Skeleton in the Closet,” “The Ghost of Smokey Joe” and “With Her Head Tucked Underneath Her Arm.” Most of the music is from the swing era with such bands as those led by Red Nichols, Don Redman, Glen Gray, Louis Prima, Ozzie Nelson, Cab Calloway, Tommy Dorsey and even Rudy Vallee alternating with much more obscure groups. The producers at Jass have also “enhanced” the music by inserting odd sound effects between songs. This CD certainly qualifies as the definitive (and also only) Halloween jazz album. –Scott Yanow, AllMusic

If you’re having a Halloween party this year, you’ll enjoy this humorous, swinging collection!

Moanin’ in the Moonlight was Howlin’ Wolf’s first collection of sides for the Chess label, packed with great tunes and untouchable performances by the man himself. The last word in electric Chicago blues, Wolf was possessed of fine guitar and harp skills, a voice that could separate skin from bone, and a sheer magnetism and charisma that knew (and has known) no equal. This disc is outstanding throughout, and features some of his best sides, including “How Many More Years,” “Smokestack Lightnin’,” “Evil,” and “I Asked for Water (She Gave Me Gasoline).” Highly recommended for the uninitiated and a must for collectors. -Rovi Staff, AllMusic Review

Song List:
Moanin’ At Midnight
How Many More Years
Smokestack Lightnin’
Baby How Long
No Place To Go (You Gonna Wreck My Life)
All Night Boogie (All Night Long)
Evil (Is Going On)
I’m Leavin’ You
Moanin’ for My Baby
I Asked For Water
Forty Four
Somebody In My Home

Break On Through by The Doors

For What Its Worth by Buffalo Springfield

My Back Pages by The Byrds

White Rabbit by The Jefferson Airplane

Skeleton In The Closet by Nat Gonella & His Georgians

Swingin’ At The Seance by Glenn Miller & His Orchestra

No Place To Go by Howlin’ Wolf

You can access digital library content on PCs, Macs and mobile devices. For mobile devices simply download the OverDrive and/or the RBDigital app, to check out eBooks, downloadable audiobooks and on-demand magazines, from your app store to get started. If you have questions call the library at 607-936-3713 and one of our tech coaches will be happy to assist you.