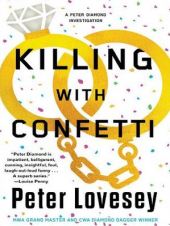 As a New Year begins in Bath, Ben Brace proposes to his long-term girlfriend, Caroline, the daughter of notorious crime baron Joe Irving, who is coming to the end of a prison sentence. The problem is that Ben’s father, George, is the Deputy Chief Constable. A more uncomfortable set of in-laws would be hard to imagine. But mothers and sons are a formidable force: a wedding in the Abbey and reception in the Roman Baths are arranged before the career-obsessed DCC can step in.

Peter Diamond, Bath’s head of CID, is appalled to be put in charge of security on the day. Ordered to be discreet, he packs a gun and a guest list in his best suit and must somehow cope with potential killers, gang rivals, warring parents, bossy photographers and straying bridesmaids. The laid-back Joe Irving seems oblivious to the danger he is in from rival gang leaders, while Brace can’t wait for the day to end. Will the photo session be a literal shoot? Will Joe Irving’s speech as father of the bride be his last words? Can Diamond pull off a miracle, avert a tragedy and send the happy couple on their honeymoon?

The Memory of Love by Aminatta Forna (Format: eBook): 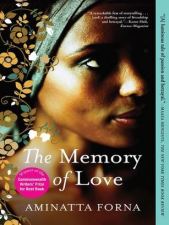 “[A] luminous tale of passion and betrayal” set in the post-colonial and civil war eras of Sierra Leone (The New York Times).

Winner of the Commonwealth Writers’ Prize for Best Book

As a decade of civil war and political unrest comes to a devastating close, three men must reconcile themselves to their own fate and the fate of their broken nation. For Elias Cole, this means reflecting on his time as a young scholar in 1969 and the affair that defined his life. For Adrian Lockheart, it means listening to Elias’s tale and following his own heart into a heated romance. For Elias’s doctor, Kai Mansaray, it’s desperately battling his nightmares by trying to heal his patients.

As each man’s story becomes inexorably bound with the others’, they discover that they are connected not only by their shared heritage, pain, and shame, but also by one remarkable woman.

The Memory of Love is a beautiful and ambitious exploration of the influence history can have on generations, and the shared cultural burdens that each of us inevitably face.

“A soft-spoken story of brutality and endurance set in postwar Sierra Leone . . . Tragedy and its aftermath are affectingly, memorably evoked in this multistranded narrative from a significant talent.” —Kirkus Reviews 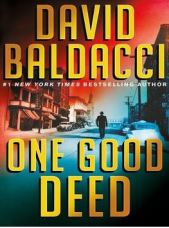 It’s 1949. When war veteran Aloysius Archer is released from Carderock Prison, he is sent to Poca City on parole with a short list of do’s and a much longer list of don’ts: do report regularly to his parole officer, don’t go to bars, certainly don’t drink alcohol, do get a job-and don’t ever associate with loose women.

The small town quickly proves more complicated and dangerous than Archer’s years serving in the war or his time in jail. Within a single night, his search for gainful employment-and a stiff drink-leads him to a local bar, where he is hired for what seems like a simple job: to collect a debt owed to a powerful local businessman, Hank Pittleman.

Soon Archer discovers that recovering the debt won’t be so easy. The indebted man has a furious grudge against Hank and refuses to pay; Hank’s clever mistress has her own designs on Archer; and both Hank and Archer’s stern parole officer, Miss Crabtree, are keeping a sharp eye on him.

When a murder takes place right under Archer’s nose, police suspicions rise against the ex-convict, and Archer realizes that the crime could send him right back to prison . . . if he doesn’t use every skill in his arsenal to track down the real killer. 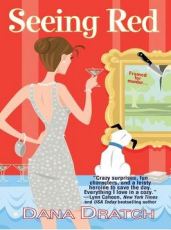 If it wasn’t for art thieves, spies and killers, Alex Vlodnachek’s life would be bliss.

Her freelance career is catching fire. Her relationship with B&B owner Ian Sterling is flirty and fun. She’s even attending a glittering cocktail party at his sprawling Victorian inn.

But, to this ex-reporter, something seems “off.” And it’s not the canapés. When Ian’s father vanishes, the enigmatic innkeeper asks for her discretion. And her assistance.

Meanwhile, Alex is having the opposite problem at her tiny bungalow: People keep piling in uninvited. Including a mysterious intruder found sleeping in her kitchen. Her grandmother, Baba, who shows up “to help”—with Alex’s own mother hot on her heels.

When the intrepid redhead discovers a body in the B&B’s basement and a “reproduction” Renoir in the library, she begins to suspect that Ian is more than just a simple hotel owner.

Can she find the missing man before it’s too late? Or will Alex be the next one to disappear?

The Summer of Ellen by Agnete Friis (Format: eBook): 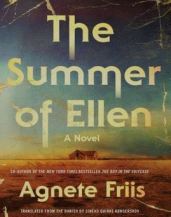 Agnete Friis’s lyrical, evocative work of psychological suspense weaves together two periods in one man’s life to explore obsession, toxic masculinity, and the tricks we play on our own memory.

Jacob, a middle-aged architect living in Copenhagen, is in the alcohol-soaked throes of a bitter divorce when he receives an unexpected call from his great-uncle Anton. In his nineties and still living with his brother on their rural Jutland farm—a place Jacob hasn’t visited since the summer of 1978—Anton remains haunted by a single question: What happened to Ellen?

To find out, Jacob must return to the farm and confront what took place that summer—one defined by his teenage obsession with Ellen, a beautiful young hippie from the local commune, and the unsolved disappearance of a local girl. In revisiting old friends and rivals, Jacob discovers the tragedies that have haunted him for over forty years were not what they seemed.
—– 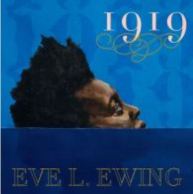 The Chicago Race Riot of 1919, the most intense of the riots comprising the nation’s Red Summer, has shaped the last century but is not widely discussed. In 1919, award-winning poet Eve L. Ewing explores the story of this event—which lasted eight days and resulted in thirty-eight deaths and almost 500 injuries—through poems recounting the stories of everyday people trying to survive and thrive in the city. Ewing uses speculative and Afrofuturist lenses to recast history, and illuminates the thin line between the past and the present.

Death In A Budapest Butterfly by Julia Buckley: 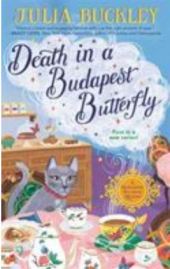 Hana Keller serves up European-style cakes and teas in her family-owned tea house, but when a customer keels over from a poisoned cuppa, Hana and her tea-leaf reading grandmother will have to help catch a killer in the first Hungarian Tea House Mystery from Julia Buckley.

Hana Keller and her family run Maggie’s Tea House, an establishment heavily influenced by the family’s Hungarian heritage and specializing in a European-style traditional tea service. But one of the shop’s largest draws is Hana’s eccentric grandmother, Juliana, renowned for her ability to read the future in the leaves at the bottom of customers’ cups. Lately, however, her readings have become alarmingly ominous and seemingly related to old Hungarian legends…

When a guest is poisoned at a tea event, Juliana’s dire predictions appear to have come true. Things are brought to a boil when Hana’s beloved Anna Weatherley butterfly teacup becomes the center of the murder investigation as it carried the poisoned tea. The cup is claimed as evidence by a handsome police detective, and the pretty Tea House is suddenly endangered. Hana and her family must catch the killer to save their business and bring the beautiful Budapest Butterfly back home where it belongs.

Inland: A Novel by Téa Obreht: 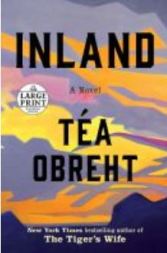 The New York Times bestselling author of The Tiger’s Wife returns with “a bracingly epic and imaginatively mythic journey across the American West” (Entertainment Weekly).

In the lawless, drought-ridden lands of the Arizona Territory in 1893, two extraordinary lives unfold. Nora is an unflinching frontierswoman awaiting the return of the men in her life—her husband, who has gone in search of water for the parched household, and her elder sons, who have vanished after an explosive argument. Nora is biding her time with her youngest son, who is convinced that a mysterious beast is stalking the land around their home.

Meanwhile, Lurie is a former outlaw and a man haunted by ghosts. He sees lost souls who want something from him, and he finds reprieve from their longing in an unexpected relationship that inspires a momentous expedition across the West. The way in which Lurie’s death-defying trek at last intersects with Nora’s plight is the surprise and suspense of this brilliant novel.

Mythical, lyrical, and sweeping in scope, Inland is grounded in true but little-known history. It showcases all of Téa Obreht’s talents as a writer, as she subverts and reimagines the myths of the American West, making them entirely—and unforgettably—her own.

In The Shadows of Spindrift House by Mira Grant: 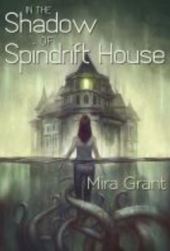 For Harlowe Upton-Jones, life has never been a straight line. Shipped off to live with her paternal grandparents after a mysterious cult killed her mother and father, she has grown up chasing the question behind the curve, becoming part of a tight-knit teen detective agency. But “teen” is a limited time offer, and when her friends start looking for adult professions, it’s up to Harlowe to find them one last case so that they can go out in a blaze of glory.

Welcome to Spindrift House. The stories and legends surrounding the decrepit property are countless and contradictory, but one thing is clear: there are people willing to pay a great deal to determine the legal ownership of the house. When Harlowe and her friends agree to investigate the mystery behind the manor, they do so on the assumption that they’ll be going down in history as the ones who determined who built Spindrift House – and why.

Rocket To The Morgue by Anthony Boucher: 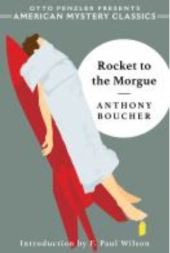 Legendary science fiction author Fowler Faulkes may be dead, but his creation, the iconic Dr. Derringer, lives on in popular culture. Or, at least, the character would live on if not for Faulkes’s predatory and greedy heir Hilary, who, during his time as the inflexible guardian of the estate, has created countless enemies in the relatively small community of writers of the genre. So when he is stabbed nearly to death in a room with only one door, which nobody was seen entering or exiting, Foulkes suspects a writer. Fearing that the assailant will return, he asks for police protection, and when more potentially-fatal encounters follow, it becomes clear to Detective Terry Marshall and his assistant, the inquisitive nun, Sister Ursula, that death awaits Mr. Foulkes around every corner. Now, they’ll have to work overtime to thwart the would-be murderer―a task that requires a deep dive into the strange, idiosyncratic world of science fiction in its early days.

With characters based heavily on Anthony Boucher’s friends at the Manana Literary Society, including Robert Heinlein, L. Ron Hubbard, and Jack Parsons, Rocket to the Morgue is both a classic locked room mystery and an enduring portrait of a real-life writing community. Reprinted for the first time in over thirty years, the book is a must-read for fans of mysteries and science fiction alike.

Book descriptions are provided by the publishers unless otherwise specified.

For mobile devices simply download the Libby app, for eBooks & downloadable audiobooks, or the RB Digital app, for on-demand magazines, from your app store to get started. And if you’re using a PC or Mac simply click on the following links: https://stls.overdrive.com/ or https://www.rbdigital.com/stlschemungcony/service/magazines/landing?