The title says this collection is just for kids; however, although kids will certainly enjoy this collection – it has a great nostalgic quality to it for those of us who grew up watching Alfred Hitchcock’s TV shows and movies!

Here is a description of this cool album: The master of suspense gets delightfully campy on his 1962 Golden Records LP Ghost Stories for Young People. He ushers in the chills for the children as he narrates The Haunted and the Hunted; The Helpful Hitchhiker; The Magician, and more. Side two, as it were, of this twofer is a creepy-cool 1963 LP on which Dead End Kid Gabriel Dell delivers Frankenstein s Monster Speaks and Dracula’s Return, complete with sound effects!

Stories in the collection include:
1. GHOST STORIES FOR YOUNG PEOPLE – How To Listen To Ghost Stories
2. The Haunted And The Hunted (The Pirate s Curse)
3. Plumbing Problem
4. The Magician ( Til Death Do Us Part)
5. Rising Tide
6. Johnny Takes A Dare (The More The Merrier)
7. Marvelous Floating Chair
8. The Open Window By Saki (Special Adaptation)
9. Paddling To The Kitchen
10. The Helpful Hitchhiker
11. Sitting On The Refrigerator
12. Jimmy Takes Vanishing Lessons
13. A Few Final Words Before Sinking 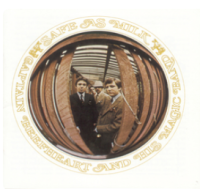 Captain Beefheart’s first album was less aggressively eccentric then the later work that made him a polarizing cult hero, but there are enough odd angles and melodic detours in tunes like “Electricity” and “Grown So Ugly” to remind anyone who this is. 1967’s Safe As Milk is full of great buzzy guitar (some courtesy Ry Cooder) and some of Beefheart’s most potent blues shouting, and “I’m Glad” is as close to sincere blue-eyed soul as he would ever get. – Mark Deming, AllMusic/Tumblr review

Songs on the LP include Sure ‘Nuff ‘n’ Yes, I Do, Zig Zag Wanderer, Droput Boggie, I’m Glad and Electricity.

The Book of Taliesyn is the second album by the progressive rock band Deep Purple.

This is a terrific album showcasing how rock music began to grow and expand as a musical art form in the late sixties.

Songs on the album include Listen, Learn, Read On, Exposition/We Can Work It Out, Anthem, River Deep, Mountain High and It’s All Over. 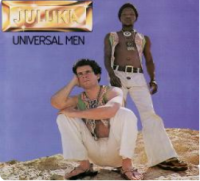 Universal Men, Juluka’s 1979 debut album (belatedly released in the U.S. in 1992), was a remarkable document for its time. Johnny Clegg and Sipho Mchunu achieved a canny mixture of Western folk-rock and Zulu chant, creating a pop hybrid like nothing that had been heard before, even if the flute and sax solos of Robbie Jansen, playing against the acoustic guitars and Clegg’s reedy voice, sometimes suggested Jethro Tull. And Clegg, Mchunu, and company were just as ambitious lyrically, constructing a concept record about the life of a South African migrant worker who played into the band’s social consciousness and pan-African nationalism, notably in the song “Africa,” which became one of their signature tunes. In retrospect, Universal Men is not as impressive as later Juluka albums that expanded upon its basic formula, but it retains historical importance as a major document in African popular music and thus an influence on world popular music, leading to the development of mbaqanga. And those Zulu choruses are catchy, too. – William Ruhlmann, AllMusic Review

Do You Believe in Heather? (2019) composed by Ståle Kleiberg and performed by Various Artists (Genre: Classical):

Composer Ståle Kleiberg is quite popular in Norway and is beginning to gain appreciation abroad for scores that fall into an easy modal framework, but have a complex inwardness that marks them as part of the contemporary era. He is sometimes classed as neo-Romantic, but somehow his music, languid and lyrical as it may be, has a psychological dimension that makes the label seem unsuitable. A characteristic work here is the Trio Luna (sample “Luna serale”), for the Debussyan ensemble of flute, viola, and harp. Like Debussy, Kleiberg succeeds in divorcing the harp totally from its salon connotations; it imbues the work with the shades of moonlight the music represents. The opening String Quartet No. 3, although more abstract, is similar in mood. There are two song cycles, both set to works by poet Helge Torvund, who has had an ongoing creative relationship with Kleiberg. The album title is from one of them: Trur du på lyng? (Do You Believe in Heather?). As the title suggests, the poems are not only naturalistic but involve, in a quintessentially Scandinavian way, inner reactions to nature. The low-key, low-vibrato singing of soprano Marianne Beate Kielland captures the meditative quality of the texts beautifully. A notable feature of the album is that it is an ensemble creation; although Kielland appears on more than half of the music on the album, no specific artist is billed. Highly recommended for lovers of contemporary chamber music.- James Manheim, AllMusic Review.

Kid Ory (1886-1973) was a New Orleans based trombonist and a member of the first generation of Jazz musicians. He first achieved success playing with his band in the teens of the 20th Century. He took a hiatus from music and raised chickens during the Great Depression and then returned to playing music professionally in the 1940s and continued to play professionally through subsequent decades. He eventually retired to Hawaii where he died in 1973 at age 86.

This is a fun brassy album featuring the songs Sweet Lorraine, Down by the Riverside, Baby Face, Dinah and the World is Waiting for the Sunrise.

Act Surprised is the brand new album from the indie rock band Sebadoh.

And you like hard rock and are taking a road trip this summer, this is a fun album to play with the volume turned up as you’re rolling down the highway!

Songs in the set include Phantom, Celebrate The Void, Follow the Breath, See-Saw and Vacation.

The Jar from The Alfred Hitchcock Hour

Electricity by Captain Beefheart And His Magic Band (Cannes Live 1968):