This week, since it is almost summer, I’m going to highlight seven playlists you can enjoy during June, and indeed, all the lazy, hazy days of summer!

Age Against The Machine: A Playlist for Getting Older by Various Artists:

This is an eighty song set that features songs that range from reflective to humorous as the singer/narrators ponder life, where we’ve been, where we are and where we are going.

Songs in the set include Growin’ Up by Bruce Springsteen, Grow Old With Me by Tom O’Dell, That Silver Haired Daddy of Mine by Johnny Cash, Time Marches on by Tracy Lawrence and People Get Old by Lori McKenna.

Book It: A Summer Reading Playlist by Various Artists:

This playlist is a vibrant eclectic collection of 80 songs that range the gamut from relaxing to modern in-your-face rock.

There is, undoubtedly, a song for every mood and listener in this set!

Songs in the collection include Reading by Matt Pond PA, I Could Write A Book by Dinah Washington, Tell Me A Story by Iggy Pop, Summer Jam by The Piano Guys, Read About It by Midnight Oil, Open Book by Cake, Sugar by Louis Armstrong and Word Crimes by Weird Al Yankovic.

Songs in this collection of soft relaxing music include Orchestra Suite No. 3, The Carnival Of The Animals, Peer Gynt Suite No. 1, Symphony No. 9 and November Rain by Northern String Quartet.

The Journey is Long: A Hiking Playlist by Various Artists: 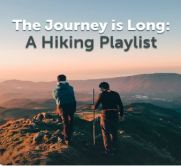 This eighty nine song playlist features a solid mix of classic and contemporary artists and, you could indeed listening to it while hiking; however, it would also make a nice barbeque-summer party playlist!

Songs in the collection include American Summer by Giilants, Pretty Shinning People by George Ezra, On The Road by Buddy Guy, People Going Places by The Servants, Can’t Run by Paul Simon and Riders on the Storm by Santana with Ray Manzarek.

Songs in the set include To the Ends of the Earth by Nat King Cole, Along Came Betty by Art Blakey, Just The Way You Look by Art Farmer, Sugar by Stanley Turrentine and Jutterbug Waltz by Earl Hines.

The Setting of the Sun: A Singer-Songwriter Playlist by Various Artists:

The Setting of the Sun is an eighty-three song playlist featuring some great, thoughtful folk songs including 1952 Vincent Black Lightning by Richard Thompson, Where’s My Tribe? By Charlene Soraia, Summers End by John Prime, The One That Got Away by The Civil Wars, The Lily of the West by Joan Baez, Hotel St. Cecilia by Joy Williams, This Land Is your Land by Woody Guthrie and The Timers Are A-Changin’ by Bob Dylan.

Summer Heat, indeed! This is a ninety-four song collection of modern music including Giant by Calvin Harris, Deeper Shade of Soul by Urban Dance Squad, Summer Nights by Demy, 50 Ways to Leave  Your Lover by PPP & Rogier and Summertime Magic by Childish Gambino.

Take it Easy: A Relaxation Playlist by Various Artists: 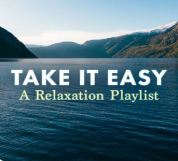 Take It Easy is a seventy six-song playlist of modern relaxation classics including Lighthouse by Grouper, Never Is a Promise by Fiona Apple, Requiem for a Fallen Tree by Lubomyr Melnyk, Yin and Yang by uyama hiroto and Africa by The Orb.

If your idea of easy listening is a more traditional vocal one, then check out this collection by the great Frank Sinatra.

The “V Discs” were specially made by various record companies in conjunction with the U.S Government, and were played for U.S. serviceman during the War, and the “V” actually stands for “Victory.”

In Sinatra’s case, since he was signed to Columbia Records, the recordings were made by Columbia who saved the masters.

This is a terrific fifty-three song collection!

Songs in the set include Kiss Me Again, (There’ll Be A) Hot Time In The Town of Berlin, I Couldn’t Sleep A Wink, The Way You Look Tonight, A Lovely Way To Spend An Evening, Speak Low and You Are Too Beautiful.

Grow Old With Me by Tom O’Dell

Still Crazy After All These Years by Paul Simon

Those Were The Days by Mary Hopkin

Time Waits for No One by The Friends of Distinction

Summer Jam by The Piano Guys

Can’t Run But by Paul Simon

When You Wish Upon A Star- Ken Peplowski Quartet

Summer Breese by The Isley Brothers

Doughnuts Forever by The Orb

I Only Have Eyes For You by Frank Sinatra

Over The Rainbow by Frank Sinatra