DIGITAL SUGGESTIONS OF THE WEEK:

Book one in the hit series that’s soon to be a major motion picture starring Amandla Stenberg and Mandy Moore—now with a stunning new look and an exclusive bonus short story featuring Liam and his brother, Cole. When Ruby woke up on her tenth birthday, something about her had changed. Something alarming enough to make her parents lock her in the garage and call the police. Something that got her sent to Thurmond, a brutal government “rehabilitation camp.” She might have survived the mysterious disease that killed most of America’s children, but she and the others emerged with something far worse: frightening abilities they cannot control.

Now sixteen, Ruby is one of the dangerous ones. But when the truth about Ruby’s abilities—the truth she’s hidden from everyone, even the camp authorities—comes out, Ruby barely escapes Thurmond with her life. On the run, she joins a group of kids who escaped their own camp: Zu, a young girl haunted by her past; Chubs, a standoffish brainiac; and Liam, their fearless leader, who is falling hard for Ruby. But no matter how much she aches for him, Ruby can’t risk getting close. Not after what happened to her parents. While they journey to find the one safe haven left for kids like them—East River—they must evade their determined pursuers, including an organization that will stop at nothing to use Ruby in their fight against the government. But as they get closer to grasping the things they’ve dreamed of, Ruby will be faced with a terrible choice, one that may mean giving up her only chance at a life worth living.

A Rogue of Her Own, Windham Brides Series, Book 4 by Grace Burrowes (Format: eBook):

For Miss Charlotte Windham, the best way to maintain her spinsterhood-and her independence-is a teeny, tiny brush with scandal. She chooses wealthy, handsome upstart Lucas Sherbourne as her unwitting accomplice. He’s intelligent, logical, and ambitious. What Charlotte doesn’t count on is that one kiss will lead them straight to the altar.

Sherbourne has no love for polite society, nor is he keen on being anybody’s husband of last resort. He is attracted to Charlotte’s boldness, though-and her family’s influence. Without a title, he knows he’ll never truly be part of their world, even as he and Charlotte inch closer to a marriage that means much more than convenience. But a scheming business partner is about to test that tenuous trust, forcing Sherbourne to make a drastic choice: his wealth or his wife.

Texas: A Novel written by James A. Michener and read by Larry McKeever (Format: Downloadable Audiobook): 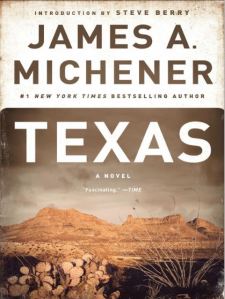 Spanning four and a half centuries, James A. Michener’s monumental saga chronicles the epic history of Texas, from its Spanish roots in the age of the conquistadors to its current reputation as one of America’s most affluent, diverse, and provocative states. Among his finely drawn cast of characters, emotional and political alliances are made and broken, as the loyalties established over the course of each turbulent age inevitably collapse under the weight of wealth and industry. With Michener as our guide, Texas is a tale of patriotism and statesmanship, growth and development, violence and betrayal—a stunning achievement by a literary master.

The Stars Are Fire: A Novel written by Anita Shreve and read by Suzanne Elise Freeman (Format: Downloadable Audiobook): 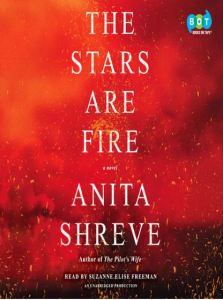 From the New York Times best-selling author of The Weight of Water and The Pilot’s Wife (an Oprah’s Book Club selection): an exquisitely suspenseful new novel about an extraordinary young woman tested by a catastrophic event and its devastating aftermath—based on the true story of the largest fire in Maine’s history

In October 1947, after a summer long drought, fires break out all along the Maine coast from Bar Harbor to Kittery and are soon racing out of control from town to village. Five months pregnant, Grace Holland is left alone to protect her two toddlers when her husband, Gene, joins the volunteer firefighters. Along with her best friend, Rosie, and Rosie’s two young children, Grace watches helplessly as their houses burn to the ground, the flames finally forcing them all into the ocean as a last resort. The women spend the night frantically protecting their children, and in the morning find their lives forever changed: homeless, penniless, awaiting news of their husbands’ fate, and left to face an uncertain future in a town that no longer exists. In the midst of this devastating loss, Grace discovers glorious new freedoms—joys and triumphs she could never have expected her narrow life with Gene could contain—and her spirit soars. And then the unthinkable happens—and Grace’s bravery is tested as never before.

Crispin Guest has fallen far from his privileged position as a knight in medieval high society. Accused of treason, abandoned by former friends and allies, he has survived on the gritty streets of London by reinventing himself as “The Tracker,” a private investigator for hire who can locate lost objects or uncover the clandestine lives of people.

When the secretive, wealthy merchant Nicholas Walcote hires Guest to investigate his alluring young wife Philippa for adultery, he discovers a seedy underworld of covert dealings and violent men of mystery. Philippa is indeed hiding something and she’s not the only one. Guest soon learns that Walcote is rumored to be in possession of a mystical holy relic so powerful that some would even kill for it.

Guest must contend with his nemesis, Sheriff Simon Wynchcombe in the search for answers to the questions surrounding the mysterious Walcotes. With each new day comes another layer of intrigue and Guest quickly becomes entangled in a strange world of superstition, seduction, and murder.

PRINT BOOK SUGGESTIONS OF THE WEEK:

The Atlas of Reds and Blues: A Novel by Devi S. Laskar: 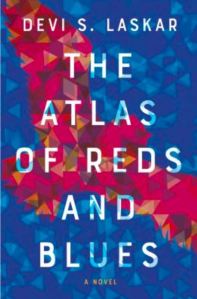 When a woman―known only as Mother―moves her family from Atlanta to its wealthy suburbs, she discovers that neither the times nor the people have changed since her childhood in a small Southern town. Despite the intervening decades, Mother is met with the same questions: Where are you from? No, where are you really from? The American-born daughter of Bengali immigrants, she finds that her answer―Here―is never enough.

Mother’s simmering anger breaks through one morning, when, during a violent and unfounded police raid on her home, she finally refuses to be complacent. As she lies bleeding from a gunshot wound, her thoughts race from childhood games with her sister and visits to cousins in India, to her time in the newsroom before having her three daughters, to the early days of her relationship with a husband who now spends more time flying business class than at home.

The Atlas of Reds and Blues grapples with the complexities of the second-generation American experience, what it means to be a woman of color in the workplace, and a sister, a wife, and a mother to daughters in today’s America. Drawing inspiration from the author’s own terrifying experience of a raid on her home, Devi S. Laskar’s debut novel explores, in exquisite, lyrical prose, an alternate reality that might have been.

Mark Renton is finally a success. An international jet-setter, he now makes significant money managing DJs, but the constant travel, airport lounges, soulless hotel rooms and broken relationships have left him dissatisfied with his life. He’s then rocked by a chance encounter with Frank Begbie, from whom he’d been hiding for years after a terrible betrayal and the resulting debt. But the psychotic Begbie appears to have reinvented himself as a celebrated artist and – much to Mark’s astonishment – doesn’t seem interested in revenge.

Sick Boy and Spud, who have agendas of their own, are intrigued to learn that their old friends are back in town, but when they enter the bleak world of organ-harvesting, things start to go so badly wrong. Lurching from crisis to crisis, the four men circle each other, driven by their personal histories and addictions, confused, angry – so desperate that even Hibs winning the Scottish Cup doesn’t really help. One of these four will not survive to the end of this book. Which one of them is wearing Dead Men’s Trousers?

Fast and furious, scabrously funny and weirdly moving, this is a spectacular return of the crew from Trainspotting.

The Lost Night: A Novel by Andrea Bartz:

So many unreliable narrators headline thrillers these days, you’d think human beings have an innate problem with telling the difference between truth and lies, even to ourselves. (Oh, wait. Maybe we do.) But Lindsay Bach, the main narrator of Andrea Bartz’s hypnotic The Lost Night, is cut from a different cloth. She’s never doubted she was at a concert the night her best friend, Edie, committed suicide ten years ago—at least until another friend states just as unequivocally that Lindsay never arrived. Now Edie’s “suicide” is questionable as well, as Lindsay unearths a rats’ nest of secrets but finds just as many holes in her own memory. As Lindsay assembles old Facebook photos, conversations with former friends, shaky memories, and an equally shaky handheld video recording, the truth of that night draws closer, even as Lindsay wonders if she can handle knowing what really happened. Bartz drops enough hints that some readers will pat themselves on the backs for spotting the big reveal, while others will gasp. As Brooklyn’s drug-fueled hipster scene transmutes between glorious and grimy, nostalgic and toxic, Bartz’s debut thriller achieves a complex, murky depth perfectly designed to hide the facts Lindsay so desperately desires and fears. —Adrian Liang, Amazon Book Review

The Priory of the Orange Tree by Samantha Shannon:

From the internationally bestselling author of The Bone Season, an enthralling epic fantasy about a world on the brink of war with dragons–and the women who must lead the fight to save it.

A queendom without an heir.

The House of Berethnet has ruled Inys for a thousand years. Still unwed, Queen Sabran the Ninth must conceive a daughter to protect her realm from destruction–but assassins are getting closer to her door.

Ead Duryan is an outsider at court. Though she has risen to the position of lady-in-waiting, she is loyal to a hidden society of mages. Ead keeps a watchful eye on Sabran, secretly protecting her with forbidden magic.

Across the dark sea, Tané has trained all her life to be a dragonrider, but is forced to make a choice that could see her life unravel.
Meanwhile, the divided East and West refuse to parley, and forces of chaos are rising from their sleep.

The Test by Sylvain Neuvel: 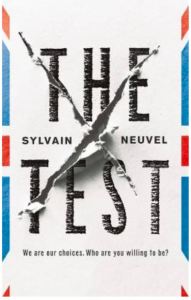 A timely novella with a powerful thematic punch, Neuvel’s latest is set in a dystopian future where immigrants seeking citizenship in England must pass a harrowing test…Obvious political commentary aside, the questions Neuvel asks readers are simple yet profound: What does it mean to be human? Is one person’s life less valuable than another’s because of ethnic, religious, or socioeconomic differences? Is the true nature of humankind fear and hate or love and acceptance? Thought-provoking and disturbing. A cautionary tale illuminated with dark enlightenment.– “Kirkus Reviews (starred review)”

You can access digital library content on PCs, Macs and mobile devices. For mobile devices simply download the OverDrive, Freegal or RB Digital app from your app store to get started. If you have questions call the library at: 607-936-3713 and one of our tech coaches will be happy to assist you.