Some of my friends were talking about “machine learning,” and then I saw it in the news. Today I looked up the term. The definition seems to be at the cutting edge of technology in the sense that the definition still varies depending on the application, and might not be the same everywhere. 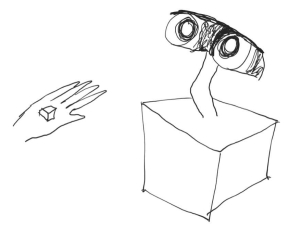 Disclaimer aside, I watched a preview of a course by Stanford professor, Andrew Ng, available through Coursera.com. As Ng defines it, “machine learning is the science of getting computers to act without being explicitly programmed.” He explained that, for example, someone with programming experience but little skill at a board game such as Checkers could teach a machine (computer) to learn to win at Checkers ( Arthur Samuel 1959).

One description of machine learning that Ng presented distinguishes three elements used to teach a machine to learn. 1) Experience: games of Checkers based on rules and a program written by a programmer. 2) Task: win at the game of Checkers. 3) Performance: probability the machine will win the next game of checkers. My understanding is that because a machine doesn’t need to spend time on human activities, it can then spend all of its time sorting out better ways to improve the probability of success at a given task. Thus, if we program intelligently enough, machines have the potential of becoming much better at a task that a human, and much faster too.

My question is how much of your time would you invest preparing something to learn to do a particular task better than you? Let’s say the task itself would take you three hours to complete normally and you have to do it at least once a month. Another take on it: if you take on an apprentice in your profession, then how much of your time would you expect them to require before exceeding your abilities? In stories it seems like it’s well after the professional / mentor / teacher passes away. Computers would take a relatively short amount of time to “experience” a given task. What do you think about this “machine learning?”

The name Andrew Ng sounded familiar to me, so I checked out his homepage and it set me hopping down a rabbit-hole. Go ahead and hop in for yourself if you’re looking for

entertainment: Online to Offline is abbreviated as O2O and Andrew Ng explains the idea here (YouTube video). The video peaked my interested because I heard via LinkedIn’s Daily Rundown for today that Amazon is making deliveries to people’s car trunks! #AmazonCarDelivery

Published by Hannah of SSCL

Digital Literacy Specialist at the Southeast Steuben County Library (SSCL, public library), in Corning, New York. What does that mean? I help people use their computers, tablets, phones, grasp the concept of ever-changing technology in general. View all posts by Hannah of SSCL