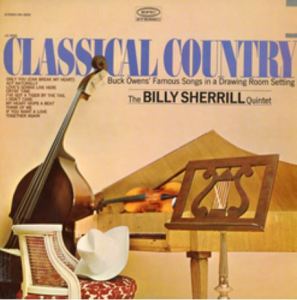 “The audaciousness with which this record was recorded is mind-blowing. Back in the 1960s, when Buck Owens was king of the charts — 12 number one singles in a row — producer Billy Sherrill decided to try to work a little of his own magic with his tunes. How he convinced Epic that a record of classically oriented Owens tunes would sell more copies than to the participating musicians’ — who are not named anywhere on the cover — parents is a mystery. Here are ten Owens classics performed by a harpsichord and a string quartet — with an endorsement by Owens on the back cover! The set opens with a particularly reverent “Act Naturally” that is indicative of the arrangements by Frank Hunter, who thought he was charting incidental music for the theater. This music is so flowery and overly ornate it’s difficult to imagine these ever having been country songs — not to mention the intonation is so awful it’s shrill. But this is part of the album’s charm. This is far from the best/worst of it; “Tiger by the Tail” gets that distinction, as do “Love’s Gonna Live Here,” “Together Again,” and “My Heart Skips a Beat.” But they’re all schmaltzy and ridiculous and only Buck Owens could have been honored by this treatment of his songs. What an awesome record.” AllMusic Review.

Sultry classic country singer Jeannie Seely offers up a bouncy, classic sixties collection of songs including: A Wanderin’ Man, A Little Bitty Tear, Funny Way of Laughing, Everything I Had and Make the World

And this week I’m staying in the sixties! This Fabulous Jokers instrumental LP sound like a mixture between the music of the Ventures and the instrumental albums put out in the fifties and sixties by artists like Henry Mancini and Percy Faith. The rock instrumental instruments are there, guitar, bass drums and so are the soft background “ooos” and “ahhs.”

This is another great album to stream as back ground music for your weekend activities – especially reading!

Songs in the collection include; Umoresco, Diamond Strings, Perdido, Instant Coffee, Harry Lime Theme, Down by The Riverside, Greyhound Express and Caravan.

Freight Train And Other North Carolina Folk Songs And Tunes (1958/2002) by Elizabeth Cotton:

“Recorded in 1957 and early 1958 by Mike Seeger, Freight Train and Other North Carolina Folk Songs and Tunes collects the influential debut sides cut by a then-62-year-old Elizabeth Cotten; even decades after their first release, they remain a veritable primer in the art of finger-picked style guitar playing. The quaint, homespun quality of the material — much of it recorded at Cotten’s home with her grandchildren looking on in silence — adds immensely to its intimacy and warmth; the sound quality varies wildly from track to track, but the amazing instrumental work shines through regardless on tracks like the opening “Wilson Rag” and the now-standard “Freight Train.”” All Music

Songs include: Freight Train, Going Down the Road Feeling Bad, Honey Babe Your Papa Cares for You, Medley: Run…Run/Mama Your Son Done Gone and When I Get Home

The Lonely Things by Glenn Yarbrough

Caravan by The Fabulous Jokers