Happy Friday everyone, here are our three recommended non-fiction DVDs for this week!
(Click on the photos to request the DVDs)

1. The Concert for New York City:

On October 20, 2001, this now-historic concert took place at Madison Square Garden, a mere six weeks after the horrific terrorist attacks on the World Trade Center. Thousands of firefighters, police officers, survivors, families, and fans witnessed a once-in-a-lifetime event as, in the space of nearly six hours, many legendary musical performers donated their time and their talent to one of the greatest causes ever, in the process giving their audience an unforgettable burst of pure emotion.

Organized by Sir Paul McCartney, the Concert for New York City was an overwhelming experience that deserves to be saved for posterity. The two-CD audio recording is crammed with dozens of superb performances but doesn’t give a sense of the whole show that this two-DVD set certainly does. Not only can we relive such seminal performers from that evening as the Who, David Bowie, John Mellencamp, and Sir Paul himself, we can see the charming and personal short films made for the occasion by such New York filmmakers as Woody Allen and Martin Scorsese, or the dozens of celebrities and unsung firefighters and police officers who immortalized that day with their stories and musical introductions.

There is one quibble: the Goo Goo Dolls’ “Iris,” one of the blues standards Eric Clapton and Buddy Guy played, and McCartney’s “From a Lover to a Friend” and “Lonely Road” are all missing, which seems curious, considering that the entire show could have easily fit onto two DVDs. So don’t erase that videotape you made of the concert the night it aired, because that remains the definitive version. But this DVD (with very good Dolby 5.1 surround sound) comes close. –Kevin Filipski, Amazon review

Trailer (or in this case, after a few seconds, a bit of concert footage from the show featuring The Who)

Life is short. The complete works of Shakespeare are long. To the rescue: THE REDUCED SHAKESPEARE COMPANY, the three-man comedy troupe known for fast, funny, physical condensations of real serious stuff. They wrap up the Bard’s outsized oeuvre in 90 roller-coaster, rib-tickling minutes. After warming up with a nothing-is-sacred send-up of Romeo and Juliet, they’re off, dispensing with the comedies in one fell swoop (because the tragedies are funnier). You decide after you see Othello as a rap song, Titus Andronicus as a cooking program, and the show’s unforgettable finale – Hamlet – told with the help of audience members and lascivious sock puppets. Contains material not seen on the PBS broadcast. “Intellectual vaudeville” – The New York Times. “Inspired American spoof merchants…slings and arrows of outrageous comedy” – Daily Telegraph. “This trio of modern Marx brothers will leave you in stitches” – Boston Herald. WARNING: High-speed hilarity. Not for people with weak hearts or English degrees! Starring Adam Long, Reed Martin & Austin Tichenor.

Trailer: (or in this case a clip from the comedies section of the program) 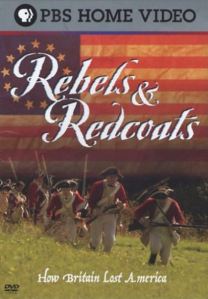 In the summer of 1776, British forces land in New York. They outmaneuver Washington in Brookline and force him out of the city. During a tough winter, he is forced to retreat and his army begins to disintegrate. Then on Christmas night, Washington leads a daring raid across the frozen Delaware River, giving him victory at Trenton and saving the revolution. Yet the British still appear superior in this war, capturing the great Fort Ticonderoga. In reality the Redcoats are overstretched on this vast continent, and in 1777 they surrender at Saratoga. The American rebels find a new ally in France, which joins them in their struggle against King George III.

Trailer (or to be more exact a fuzzy copy of the entire program as I couldn’t find a trailer for this program):