Hi everyone, here are our suggested daily recommended titles in print and digital formats.

Our Digital Catalog suggested title for today is the e-book: 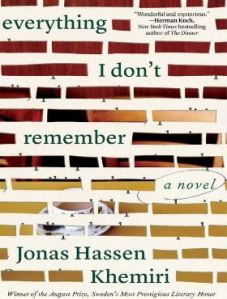 Everything I Don’t Remember: A Novel by Jonas Hassen Khemiri:

WINNER OF THE AUGUST PRIZE, SWEDEN’S MOST PRESTIGIOUS LITERARY HONOR

One of Sweden’s most celebrated young writers and activists spins an exhilarating, innovative, and gripping murder mystery reminiscent of the hit podcast Serial.

A young man named Samuel dies in a horrible car crash. Was it an accident or was it suicide? To answer that question, an unnamed writer with an agenda of his own sets out to map Samuel’s last day alive. Through conversations with friends, relatives, and neighbors, a portrait of Samuel emerges: the loving grandchild, the reluctant bureaucrat, the loyal friend, the contrived poseur. The young man who did everything for his girlfriend Laide and shared everything with his best friend Vandad. Until he lost touch with them both.

By piecing together an exhilarating narrative puzzle, we follow Samuel from the first day he encounters the towering Vandad to when they become roommates. We meet Panther, Samuel’s self-involved childhood friend whose move to Berlin indirectly cues the beginning of Samuel’s search for the meaning of love—which in turn leads Samuel to Laide. Soon, Samuel’s relationship with Laide leads to a chasm in his friendship with Vandad, and it isn’t long before the lines between loyalty and betrayal, protection, and peril get blurred irrevocably.

Everything I Don’t Remember is a gripping tale about love and memory. But it is also a story about a writer who, by filling out the contours of Samuel’s story, is actually trying to grasp a truth about himself. In the end, what remains of all our fleeting memories? And what is hidden behind everything we don’t remember? Told with Khemiri’s characteristic stylistic ingenuity, this is an emotional roller coaster ride of a book that challenges us to see ourselves—and our relationships to the closest people in our lives—in new and sometimes shocking ways.

Here’s a link to the request page in the Digital Catalog:

And our Print Book Suggested Read for today is: 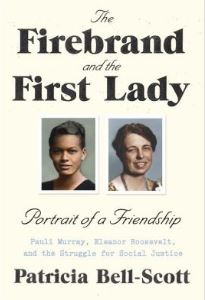 The Firebrand and the First Lady: Portrait of a Friendship: Pauli Murray, Eleanor Roosevelt, and the Struggle for Social Justice

Longlisted for the National Book Award

A groundbreaking book—two decades in the works—that tells the story of how a brilliant writer-turned-activist, granddaughter of a mulatto slave, and the first lady of the United States, whose ancestry gave her membership in the Daughters of the American Revolution, forged an enduring friendship that changed each of their lives and helped to alter the course of race and racism in America.

Pauli Murray first saw Eleanor Roosevelt in 1933, at the height of the Depression, at a government-sponsored, two-hundred-acre camp for unemployed women where Murray was living, something the first lady had pushed her husband to set up in her effort to do what she could for working women and the poor. The first lady appeared one day unannounced, behind the wheel of her car, her secretary and a Secret Service agent her passengers. To Murray, then aged twenty-three, Roosevelt’s self-assurance was a symbol of women’s independence, a symbol that endured throughout Murray’s life.

Five years later, Pauli Murray, a twenty-eight-year-old aspiring writer, wrote a letter to Franklin and Eleanor Roosevelt protesting racial segregation in the South. The president’s staff forwarded Murray’s letter to the federal Office of Education. The first lady wrote back.

Murray’s letter was prompted by a speech the president had given at the University of North Carolina, Chapel Hill, praising the school for its commitment to social progress. Pauli Murray had been denied admission to the Chapel Hill graduate school because of her race.

“Does it mean that Negro students in the South will be allowed to sit down with white students and study a problem which is fundamental and mutual to both groups? Does it mean that the University of North Carolina is ready to open its doors to Negro students . . . ? Or does it mean, that everything you said has no meaning for us as Negroes, that again we are to be set aside and passed over . . . ?”

Eleanor Roosevelt wrote to Murray: “I have read the copy of the letter you sent me and I understand perfectly, but great changes come slowly . . . The South is changing, but don’t push too fast.”

So began a friendship between Pauli Murray (poet, intellectual rebel, principal strategist in the fight to preserve Title VII of the 1964 Civil Rights Act, cofounder of the National Organization for Women, and the first African American female Episcopal priest) and Eleanor Roosevelt (first lady of the United States, later first chair of the United Nations Commission on Human Rights, and chair of the President’s Commission on the Status of Women) that would last for a quarter of a century.

Drawing on letters, journals, diaries, published and unpublished manuscripts, and interviews, Patricia Bell-Scott gives us the first close-up portrait of this evolving friendship and how it was sustained over time, what each gave to the other, and how their friendship changed the cause of American social justice.

You can request the title by clicking on the following link to StarCat: